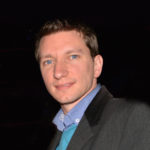 I’m a Welsh-Irish-Englishman originally from South London but now living with my French/Spanish wife and decidedly European infant daughter in Burgos, a beautiful city in the north of Spain. I write overlooking the Castilian countryside, trying not to be distracted by the vultures, hawks and red kites that fly past my window each day.

Writing has always been my passion. It was my favourite half-an-hour a week at primary school, and I started on my first, truly abysmal book as a teenager. So it wasn’t a difficult decision to study literature at university which led to an MA in Creative Writing.

At some point, I became obsessed with creating a truly great kids’ book and wrote everything from fairy tales to environmental dystopian fantasies right through to serious issue-based teen fiction. My book The Princess and The Peach was long-listed for a prize in The Times, at some point an American producer was hoping to adapt one into a film but, sadly, no matter how good the feedback I got was, the mainstream publishing industry wouldn’t take a chance on me as a debut children’s novelist and so I finally decided to write for adults instead.

I grew up in a crime fiction family and had made a few half-hearted attempts at writing one over the years before coming up with the idea for my detective Izzy Palmer.

A Corpse Called Bob is my first full length novel for adults in what, I hope, will be a long series. If you feel like telling me what you think about Izzy, my writing or the world at large, I’d love to hear from you, so feel free to get in touch.